Late last week, I caught up with our CEO who was telling me just how much he loved his iPhone 4S. He was most impressed with Siri, the new personal assistant powered by advanced artificial intelligence. He explained how he was running late to a client meeting because of a car accident and that he was able to look up the mobile number of the client and send them a text message without typing a single character. While I’ve been unimpressed with Android in the past, I’ve recently written about how amazing is Android on the Samsung Galaxy S II so it got me thinking as to why people refuse to switch.
END_OF_DOCUMENT_TOKEN_TO_BE_REPLACED 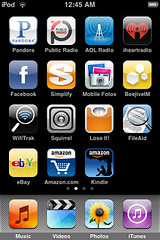 Every other month or so I get another comment from Joe Koufman, the VP of Business Development and Marketing at Engauge, on how Android is gaining ground on Apple’s iOS. These reminders are actually friendly — Joe and I have been at it ever since I wrote late last year about whether developers should embrace the Android OS. Joe knows that I’m passionate about my iPhone as he is about his Android. And we’ve spoken on numerous occasions about how Android is available on smartphone devices by multiple mobile equipment makers where Apple’s iOS is only available through AT&T (well, at least until the upcoming rumored announcement by Verizon this December) so the deck is stacked in Google’s favor.

END_OF_DOCUMENT_TOKEN_TO_BE_REPLACED

Financial information for publicly traded companies always provides a wealth of information, especially if you’re searching for clues as to where the technology is going. That’s why I love looking at quarterly earnings announcements from big technology companies, like Apple, IBM, Google and Microsoft.

Last night, Apple announced their 4th Quarter 2009 earnings and reported that their quarterly revenue hit almost $10 Billion dollars. [If you’re trying to gain some perspective on these numbers, you should consider that Microsoft recently posted revenue of $13.1 Billion for the same quarter (which ended June 30th, 2009).]

I ran across a few interesting stats in the earnings report and the analyst call transcript:

What does this mean to Technologists?

POINT #1: Apple is in a dominant market position.

They’ve reached this position via the introduction of the iPod and the iTunes Store. Over the years, everyone and I mean everyone (eg: Amazon) has tried to develop an interface with music library/music store capabilities but none have been able compete with iTunes.

Soon after the introduction of the iPhone, Apple established a Developer Program that allowed technologist to create custom applications for the iPhone platform. The program required developers to pay a fee to distribute their application in the apps section of the iTunes store. The apps were valuable to iPhone users because they could personalize their device and be more productive (eg: I can check my Starbucks card balance and the weather while listening to my favorite song). But Apple also limited the number of apps by instituting an application approval process that required new apps to be vetted before they were made available to the public. By restricting the iPhone platform (that is in wide demand), they further fueled the fire of marketers who wanted to interact with these iPhone device users.

Apple launched the iPhone in the US by establishing an exclusive relationship with AT&T. While the relationship has received plenty of criticism (source), the exclusivity agreement has benefited Apple in that they were able to focus on a single platform and deliver innovative features for that platform. They avoided marginalizing the features of the iPhone by not having to deal with integration issues that come with having to support a device on the networks of multiple carriers. Additionally, the infrastructure investment has driven AT&T to improve their customer support by providing a more robust network for a smart phone devices.

Apple provides a growing platform with a broad user base. Developers that are considering mobile applications will first need to build for the iPhone if they want to have the broadest reach. But because of the fierce competition, developers have to recognize that their app has to stand out in an already crowded market place. The good news is that Google and other competitors (aka, Microsoft) are courting developers to their mobile platform because they recognize the importance of mobile. One effective strategy that developers can employ is to look for alternate mobile platforms as a means of getting some initial buzz. By establishing a foothold in these platforms, Developers can build further recognition for their application on the iPhone platform. As part of this strategy, developers will have to utilize a platform that allows them to code their application in one language that can be compiled into a language that’s compatible with each platform. [NOTE: each mobile platform requires different programming languages/programming skills]. Otherwise, they will not be able to create and distribute their application in a timely manner.