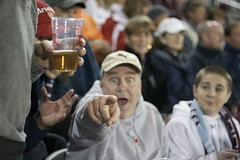 The desktop search engine industry has been awfully quiet lately. Just looking at the search volume in Google Trends reveals that there’s been little positive change in the past 12 months (see chart below). But early this week, everything suddenly changed as the two search engine giants got into a fight over Google calling out Bing for copying their search results. In summary, Google baited Bing by creating illogical search results for “synthetic” queries (aka nonsense terms). Google recruited 20 engineers with Suggested Sites in Internet Explorer 8 and had them search for these fake term in Google until the results showed up in Bing (about 2 weeks!). The next day Microsoft fired back at Google explaining that the algorithm to prioritize search results uses multiple “signals” along with collective intelligence to determine search quality and in this case Google simply exposed this flaw. In essence, the flaw suggests that Microsoft considers Google to be the authoritative source whenever the result set is limited.

While there is no denying that Bing autogenerated the same results as Google, there are two important lessons that technologists and marketers should learn from this fight:

END_OF_DOCUMENT_TOKEN_TO_BE_REPLACED

As a technologist who’s focused on marketing, I love stats (short for statistics) because they help me tell a story. But as a former researcher, I’m very familiar with the famous quote by humorist Mark Twain:

“Facts are stubborn, but statistics are more pliable.”

At last night’s AiMA event on search engine strategies, the speakers referenced a study where users showed no significant preference to Bing or Google. After a short web search (via Google), I found the research paper by the Catalyst Group (see below). In the study, users reported that they wouldn’t switch from their current search engines even though Bing possessed some favorable improvements to Google. END_OF_DOCUMENT_TOKEN_TO_BE_REPLACED

Comscore released the January 2010 rankings for search engines in the U.S. last week (source). In the release comScore indicated that Google lost 0.3% share of core search in the US in January 2010 (see below). This is the first indication that Google may be struggling to pick up additional market share from rivals, but data for the remainder of Q1 2010 is required to determine if Google has truly reached a search saturation point. If it has, we can expect Google revenue to stabilize or potentially drop but so far they continue to grow a healthy pace.

The big news is that Microsoft’s search engine Bing picked up an additional 0.6% share of US core search in January 2010 from rivals Yahoo!, AOL and Ask.com. As can be seen below, Bing has experienced strong growth in the past two quarters, which are mostly attributed to new deals (source).

Based on trending analysis of the comScore data, it seems that Bing will eclipse Yahoo sometime between August 2010 and November 2010 (the latter point based on Bing growing while Yahoo remaining the same). While Yahoo has announced a $100 M global marketing campaign to promote its revamped web portal (source), it may be too late to save the Yahoo brand. After all, we know that:

While something big can always happen, it seems that Yahoo’s decline is inevitable. RIP Yahoo.